This weekend, ARISS is celebrating its 20th anniversary with a series of SSTV transmissions from the ISS – International Space Station.

These should be easily receivable on a handheld tuned to 145.800 with anything better than the stock whip. Last time around they were loud! A 3 element tape measure yagi will work very well for this, and it’s not much effort to knock one together. Full quieting signal should be achievable.
Images can be decoded live during the passes on a smartphone using, for example, “SSTV Slow Scan TV” by Black Cat Systems for iPhone, or “Robot36 – SSTV Image Decoder” on Google Play for Android. A cable will help, but holding the mic up to the HT speaker should work okay. Alternatively recording the audio through whatever means will allow you to play around decoding later.
Passes for the weekend can be found on http://www.heavens-above.com as well as other sources. Be sure to set your location. Some key passes:

Most of the passes this weekend are visible, so assuming no cloud, antenna pointing shouldn’t be a problem 🙂
Most favourable pass taking into account the time looks like Sat 23:14:23 BST.
For those of you who have not spotted ISS in the night sky as yet, at its peak it is second only in brightness to the moon in the night sky, appearing as a solid bright white point typically low in the south-western sky from the UK, appearing to move across the sky about the same speed as an airplane at altitude. At its highest point, on a high pass, it really is hard to miss – easily brighter than Venus or Jupiter. Some passes it will fade into shadow, some it will pass across the whole sky brightly reflecting full sunlight, well into the late night down here.
If the same format is followed this time around as last, there will be 2.5 ish images per pass with a few tens of seconds gap in between, with no carrier.
Happy sat spotting…
Update
In the end I slept through most of the passes! However here’s the one image I did capture: I put together a simple cable to connect my Wouxun handy to my iPhone based on this circuit,  used an inexpensive Nagoya NA-771 whip, and for aiming, I listened for ISS on a second handy on its stock antenna, held closely and parallel to the Wouxun, broadside to ISS. Almost perfect copy, up to at least S6 or so. Great fun!
Did you capture anything? Tell us @MX0AAA! 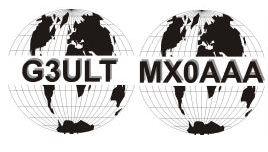